Story of How i lost upward of 2 lakhs because of renting in Xander Group’s Virtuous Retail Mall VR Surat. Beware of renting there. VR mall are exploiting lessees who are shutting down due to losses by charging full rental of the lockdown and afterwards; They are not taking rent for the lockdown period from other lessees and providing 50% rebate of rent after lockdown. VR Mall Surat is also exploiting the lessees who were not able to open shops after lockdown due to lack of man power supply or material supply by charging 50% of the rent which many retailers are in protest of.

I had open a small dessert kiosk of 70 sq-ft in Virtuous Retail VR Mall Surat on rental. The whole organisation of VR Surat seemed to have an attitude problem that the retailer have to suffer right from the starting the store and operating the store and you really feel like jailed with all their rules. The sales of our kiosk was very mediocre for the rent we were giving and even as we were just breaking even, as soon as the 11 months of the agreement was over, Xander group operated VR Surat increased the rental by 10%. So its like as soon as you start to establish yourself, rent goes up 10% every 11 month. They also don’t entertain shifting to better location without increasing high amounts of rent. Than VR Surat even ask you to pay property tax. And every payment Virtuous Retail’s VR Surat take from you whether its electricity, rent or even property tax, it charge 18% gst on it. Thats ok but then came the corona virus and lockdown from 24th march to 8th june. So i demanded the rent for the lock down to be removed and some percentage beyond for which VR Mall Surat didn’t give decision even after 2 months of operating after lockdown. Meanwhile i was running the kiosk which was timed from 11am to 7pm against the regular 11pm. The theaters, game zone and most of the food court was closed and the whole mall would even close down on Sundays because of corona. The sale was so low that even the salary could not be drawn out from it, forget about the rent. I operated the kiosk from 8th June to 9th July before realizing i need to shut down amid big losses and fear of catching corona virus. So i send the notice to shut down but then VR Mall Surat said according to agreement i have to operate one more month which i was not willing because of monetary losses and fear of corona but than i obliged to operate till 9th august. I requested VR Surat to not charge for the lockdown and minimum for which i operated. But Virtuous Retail Surat charged full for the lockdown and two months afterwards including of the notice period. I was charged 2,22,754 for that period against the business of 21,827 for that period from the deposit of 2,64,000. Virtuous Retail’s VR Surat decided to charge full rent for the ones who are shutting their shop and not from others. In my opinion they should not exploit the one who are leaving just because they decided to shut because low business. So Retailers be careful in renting shop at VR Surat by Virtuous Retail and I request them not to. Virtuous Retail is run by Xander Group Founded by Sid Yog. Their other run malls are VR Chennai, VR Bengaluru, VR Punjab, VR Ambarsar and VR Nagpur. Below is the Full and Final summary of my kiosk

How my mom lost lakhs taking 99 Pancakes franchise and you should save yours.

First of all when the first company outlet is running in loss, it should avoid giving franchise to others. That is what 99 pancakes refrained from doing. 99 pancakes charged a 5 lakh rupee franchise fees and deposit of 2 lakh to the business they themselves were making loss which i realized later. My mom took 99 pancake franchise from Franchise India whose representative coned me saying that even the bad location 99 pancake franchisees sale in Mumbai is above 8 lakh. Later i came to know its not even half of that and in most cases not even quarter of that. Now comes the bad part; The equipment 99 pancakes sold, they didn’t provide us the bill of it and took the lump sum amount which was way more than the added up cost of market rate of such equipment. Even before knowing the sale, they dumped the initial raw material in such an amount that it was difficult to finish it even in a year and didn’t take back remaining large amount of packaging material when my mom closed her 99 pancake franchise. They dumped and charged for many material in large quantity which had no use like stickers of 99 pancakes that they used earlier for putting on boxes that they stopped using because of already printed containers. Coming to the raw material, many material were charged more than the market rate like wooden forks were charged at 130+tax per 100pcs while it was available at 75+tax per 100pcs. Waffle and Pancake Premix is charged at upward rate than that of market. On top of expensive raw material, 99 pancakes charged the royalty of 7 percent on sales. My mom’s 99 pancake franchise was doing an average monthly sales of 1 lakh 40 thousand in the food court of best mall in Surat which also houses Inox just besides our store. We shut the store in mid feb in less than 2 years to which they sent us the closing agreement and deposit received slip and sent us threatening email to sign the agreement and slip or they will not refund the deposit. We signed and sent back in hope of receiving the deposit. They stopped receiving calls and we haven’t received our deposit. We invested more than 15 lakh and lost all in 99 pancakes franchise. 99 pancakes made money from us but we didn’t. 99 pancakes is run by Euphoria Hospitality pvt ltd which also run catering and bakery with the name of Happiness Deli which also has been listed in franchise. Don’t be the victim of franchise fraud, Many are there only to make them rich but not the franchisees. 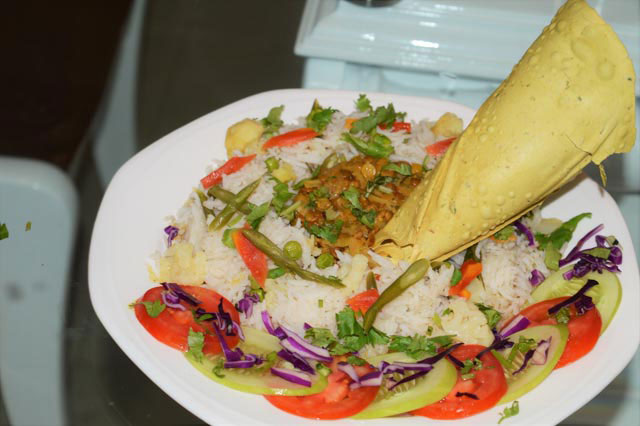 A dish inspired by Veg Biryani, keeping in mind the visual appeal and nutritional value of the dish. I added Saboot masoor to the biryani gravy to increase the protein value of the dish and instead of cooking the vegetables in gravy, i added it to the rice which not only helps increasing the visual appeal but also maintains the nutrition value of the veggies by not overcooking them. Paired with papad and served with Tomatoes and Cucumber to lighten up the dish. You can also use tomatoes instead of yogurt to make dal and then pair it with cucumber raita (Cucumber Yogurt) instead of Tomato-Cucumber Salad.

END_OF_DOCUMENT_TOKEN_TO_BE_REPLACED 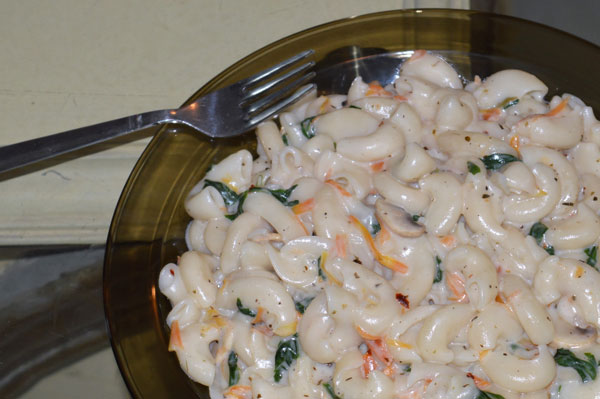 With the start of the winter, plenty of fresh vegetables flood the market. Selecting some of the nutritional ones like carrots, spinach and mushrooms, and combining with milk, cheese & pasta; this dish makes a complete meal. Best paired with Garlic bread, here is the recipe.